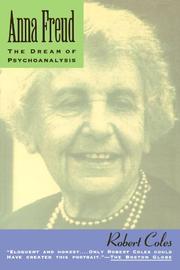 ANNA FREUD: The Dream of Psychoanalysis

A slender but rewarding intellectual portrait and appreciation that ultimately reveals as much about Pulitzer Prize-winner Coles (Psychiatry and Medical Humanities/Harvard; The Spiritual Life of Children, 1990, etc.) as his subject. As the author admits, pioneering child psychologist and generous teacher Freud served him as both mentor and model. In fact, the very form of this ""intellectual biography,"" closely following Coles's studies of Simone Weft (A Modern Pilgrimage, 1987) and Dorothy Day (A Radical Devotion--not reviewed), was, he notes, suggested by Freud's helpful comments on those books. What is offered here is not a full-scale biography, then, but a consideration of the effect and the spirit of an unusually self-effacing but undeniably important pathfinder, with the life only briefly outlined and glancingly analyzed. Coles faithfully transcribes various discussions with Freud, supplemented by her thoughtful and revealing letters and by additional comments from such sources as Erik H. Erikson (Freud's analysand) and psychologist Grete Bibring. Coles pays particular attention to the wartime British nurseries established by Freud and her longtime companion Dorothy Burlingham (a relationship he simply characterizes as ""complex""--the author's word for Freud's dealings with her illustrious father as well), to Freud's lectures, and to such important works as The Ego and the Mechanisms of Defense. Reflecting his own preoccupations as much as those of his subject, Coles examines Freud in her overlapping roles as teacher, theorist, healer, leader, idealist, and writer. Ever the visionary, excited by the ""dream"" of the transformative possibilities of psychoanalysis, yet confident (and wise) enough to admit her occasional failures, Freud emerges from this loving if idealized sketch as an unusually open-minded and dedicated, and genuinely laudable, figure. Odd, worthwhile, disappointing. No more than an introduction to Freud's work, but, because of the light it sheds on Coles's thought, of interest to his many admirers.