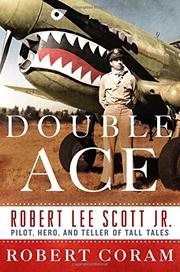 There’s no question that Robert Lee Scott (1908-2006) was a character; there’s also no question that, in the larger scheme of World War II, he was a minor player. The character business provides the author with plenty of entertaining anecdotes: as a young man from Macon, Georgia, for instance, Scott earned a Boy Scout merit badge in aviation for building a model airplane: “But a model was not ambitious enough for Rob, and so he built a glider, almost full-sized, and covered it with canvas cut from the tent of a traveling evangelist preacher.” Whether the preacher missed the cloth we do not know, but Scott would always protest that the glider experiment was the only time he ever crashed an airplane. A frozen pipe kept him from earning an AWOL charge, a lucky break that Scott credited to the deity: “The Big Sky Boss was on the job.” Flying with Claire Chennault and the Flying Tigers, Scott accumulated on-the-ground experiences and aerial kills alike, cultivating an unlikely alliance with Madame Chiang Kai-shek, the first lady of China, who had spent six years in Macon and was, Coram writes in genre cliché, “the original steel magnolia.” Scott helped Chennault agitate for a strong American presence in the Chinese theater, writing a wartime memoir whose title was for a long time a catchphrase: God Is My Co-Pilot. As Coram writes, Scott also played a role in the political maneuvering that led in the immediate postwar period to the establishment of a separate Air Force independent of the Army. Throughout, the author writes competently but without much flair; what carries the story is the subject, who had a knack for being in the right place at the right time, especially when it came to shooting down Japanese planes.

Scott remains a footnote, but Coram’s book is a pleasure for fans of military aviation history.