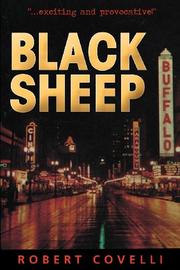 The son of a reformed mobster becomes entangled in a power struggle between a Mafia family and a new, unknown criminal element in Covelli’s (Tom Fool & Three More, 2002) thriller.

In mid-1990s Buffalo, N.Y., when a seemingly innocuous soup-kitchen regular turns up dead— ice-picked to death—Tasio Pecoranera asks his mobster friends to help identify some Mafioso-like suspects he’d seen around the time of the murder. At first, the killing appears to be part of a drug-trade war between the Mafia and a new crew, but it soon becomes clear that it’s a war for information. Evidently, whoever takes control of the forthcoming hybrid-car business—and a liberal mayoral candidate—will wield the most power in Buffalo. The novel’s initial murder mystery is merely a lure to pull Tasio into the spotlight, as Covelli’s thriller teems with colorful characters, including Tasio’s menacing uncle, Carlo, who employs a man named Tommy the Bruiser and a thug known simply as “the Monster” or “the Giant.” The whodunit is soon set aside (though eventually resolved) in favor of numerous elaborate subplots, including another murder, a disappearance, and characters seeking hybrid-car funding from a  wealthy family and Japanese investors. (There’s also ambiguity surrounding Tasio’s mother’s alleged suicide.) Much of the story is relayed via dialogue, and Covelli’s prose itself often resembles playful banter—for example, an affluent man is described as having “one and a half tons of fun” financing Carlo’s corrupt schemes. However, when Covelli introduces Tasio’s love interest, she arrives so late in the book that the relationship doesn’t have much impact. Readers may want to skip the “List of Characters” section at the beginning, as it reveals some specific plot points.

A complex Mafia thriller with plenty of engaging characters.