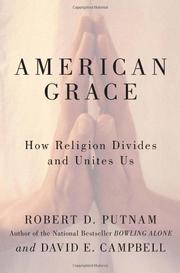 How Religion Divides and Unites Us

Putnam (Public Policy/Harvard Univ.; Bowling Alone: The Collapse and Revival of American Community, 2001, etc.) and Campbell (Political Science/Univ. of Notre Dame; Why We Vote: How Schools and Communities Shape Our Civic Life, 2006, etc.) begin with the obvious assertion that America is and has always been a religiously diverse nation, and seek to learn in what ways this is true today, and also why this diversity is not particularly problematic in modern America. The authors draw much of their data from the recent, comprehensive Faith Matters surveys, along with previous statistical surveys on faith in America. They punctuate the narrative with in-depth vignettes of particular congregations, ranging from a conservative Lutheran megachurch in Houston to a Reform synagogue near Chicago. The authors are interested in the entire religious history of America, but they focus primarily on the last half-century, using statistical research and anecdotal information to explain the decline of mainline Protestantism, the rise and leveling off of Evangelical Christianity, the demographic transformation of Catholicism and the recent rise of innovative movements such as the Emerging Church. Putnam and Campbell also examine religion in politics (and vice versa), the changing role of women in America’s faith landscape and religious activity as an indicator of civic involvement. The text is highly readable, and the authors are not afraid to come to clear conclusions. In describing the rarity with which partisan political views are actually trumpeted from the pulpit, the authors state bluntly, “Most people come to church to hear about God, not Caesar. Too much talk of Caesar risks driving them away.” The authors’ conclusion describes why, despite America’s religious diversity, “America is graced with the peaceful coexistence of both religious diversity and devotion.” Since Americans are intimately acquainted with others of diverse backgrounds more today than ever before, these relationships lead to acceptance of individuals as well as of groups of people.

A valuable contribution to the conversation surrounding faith in America.