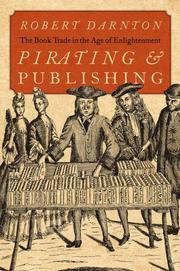 The Book Trade in the Age of Enlightenment

A dusty window into the obscure world of the burgeoning publishing industry in 18th-century France and its environs.

At the time, the regulation of the industry and the resulting economics engendered a new enterprise: pirate publishing. Only a narrow band of elites could afford to produce and buy books, an economic reality that created a market ripe for counterfeiting. Without copyright laws, however, it was not technically illegal to reproduce these works outside of France. Thus began the “Fertile Crescent” of underground bookmaking. “From Amsterdam to Brussels, through the Rhineland, across Switzerland, and down to Avignon, which was papal territory in the eighteenth century, publishers pirated everything that could be sold with any success in France,” writes Darnton. “The foreign houses also produced everything that could not get past censors employed by the French government.” Though these literary bandits operated legally within their own countries, as soon as they smuggled their goods into France, they were on the wrong side of the law. In this erudite yet dry text, Darnton seems to have included every detail that emerged from his meticulous research, devoting attention to every book deal that did, or did not, occur for authors both familiar and unknown. Darnton offers some intriguing economic insights, though few are unique to the publishing industry. Still, literary-minded readers will be impressed with the process by which a small number of men and women transformed a small book club for nobles into the massive cultural force that we know today. To be sure, many were just trying to make a living, but we owe them a great debt nonetheless. Unfortunately, the dense scholarly prose may fail to capture an audience beyond academics and students of the business of the Enlightenment.

General readers seeking enlightenment should skip the middle 75% of the book and go read Voltaire.