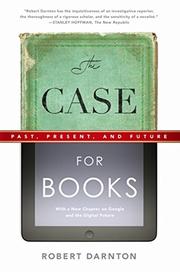 THE CASE FOR BOOKS

Past, Present, and Future

In pieces published in the New York Review of Books and elsewhere, Darnton focuses on the status of scholarly publishing and librarianship. Quoting a colleague who says that the latter is, perhaps surprisingly, tightly bound up in the world of money and power, the author notes that, for all the recent woes of the economy, a million new books are published each year around the world—books that have somehow to be put into the hands of readers. In that connection, Darnton, an eminent student of the Enlightenment and a good citizen of what that era called the Republic of Letters, considers the role of Google and its plan to scan the contents of the world’s great libraries into digital form. On the face, he writes, making such a wealth of knowledge available to readers would appear to be a public good, and there are many reasons why a bibliophile and scholar should applaud such an enterprise. Yet, he adds, after evenhanded consideration of those pluses, “The more I learned about Google, the more it appeared to be a monopoly intent on conquering markets rather than a natural ally of libraries, whose sole purpose is to preserve and diffuse knowledge.” The competing demands of public welfare and private profit occupy Darnton in several pieces, while others consider the still foggy realm of electronic publishing and the addition of value to the culture that people who work with books provide. The author also includes a few scholarly pieces on various aspects of the history of publishing (“Little is known about the way books reached bookstores from printing shops”), connected to the earlier pieces only incidentally but pleasing all the same.

Of much interest to anyone with a stake in the developing Google settlement, as well as for fans of books about books.