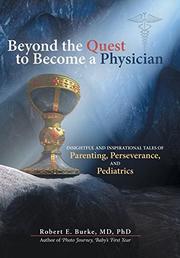 BEYOND THE QUEST TO BECOME A PHYSICIAN

A thoughtful memoir that recalls one man’s tenacious rise out of poverty to become a pediatrician.

Burke (Photo Journey: Baby’s First Year, 2013) grew up in rural Pennsylvania, a middle child in a group of six brothers. He experienced the pain of poverty as a youngster, but later went on to experience the joy of graduating magna cum laude from Wilkes College with a degree in biology. He writes that he struggled to gain entry into medical school, took a detour to a master’s degree program in botany, and then earned a doctorate in biology while performing breast cancer research. He was finally accepted into the medical school at the University of Texas Health Science Center at San Antonio, an extraordinary accomplishment, though one that resigned him to years of toil and considerable debt. He finally became a pediatrician and eventually moved back to Pennsylvania to work for a small medical group; in some ways, it was a circular return to his humble beginnings, and in others, a transcendence of it. Burke’s autobiography is dotted with scientific reflections about the making of one’s identity, which he characterizes as a complex brew of environmental influences and genetic composition. Despite the fact that he had some extraordinary disadvantages, he nevertheless rates his upbringing as a boon, and he provides an impressively balanced appraisal of its virtues and vices in this book. He credits his parents with allowing him to enjoy his liberty as a “free-range kid,” for example, and with teaching him the power of perseverance. In response to those who contend that he succeeded because of his parents’ unyielding discipline, he counters: “I would argue that it was in spite of that. Their unconditional love, encouragement, nurturing, and other positive parenting skills were much more important. The latter were embraced, the former resented.” As the title of the book suggests, Burke discovers a profound sense of purpose on the other side of his indefatigable quest to become a physician, and he writes movingly about his sense of commitment to his patients and to humankind generally. Overall, this is an eclectic remembrance that offers a wide spectrum of discussions, including an account of how he met his wife and his thoughts on the state of health care in the United States.

A philosophically charged but also charming recollection of hardship and triumph.

THE END OF POVERTY
by Jeffrey D. Sachs
Children