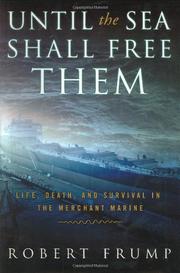 UNTIL THE SEA SHALL FREE THEM

Life, Death, and Survival in the Merchant Marine

A former maritime reporter retells and updates the story of a disastrous sinking he covered for the Philadelphia Inquirer.

Now an executive on Wall Street, Frump tries with uneven success to recover his journalist’s chops in this thorough but tendentious account of the Marine Electric, a WWII-era vessel carrying 24,000 tons of coal from Virginia to Massachusetts that broke up in a storm on Feb. 10, 1983. Conditions were so rough that 31 of the 34 officers and crew died in the frigid water before help arrived. Frump describes the ship (a rusty veteran with a myriad of structural problems that Marine Transport Lines Inc. neglected to repair), introduces the crew, and identifies a hero: chief mate Bob Cusik, who survived the sinking and distinguished himself on the witness stand during the subsequent hearings. Like their counterparts in Erin Brockovich and A Civil Action, the owners’ sleek, shifty attorneys attempted first to rattle Cusik, then to discredit him, and finally to blame him. (Not to worry: he emerges victorious.) In a Melvillian move, the author tries to universalize his account with stories of other marine disasters, including the sinking of the Badger State during the Vietnam War and the 1964 loss of the Daniel Morrell, whose sole survivor suffered severe psychological trauma. Frump also intercuts scenes in the newsroom of the Philadelphia Inquirer, whose reporters pursued the story with Woodward-and-Bernstein tenacity, and includes exchanges from the Marine Board of Investigation’s hearings, which produced another hero: Coast Guard Capt. Dom Calicchio, who suffered no fools gladly. An interesting epilogue reveals what the principals are doing nowadays and calculates the effects of the disaster on the Merchant Marine. Overall, it’s a gripping tale marred somewhat by clichés and overwriting, e.g., “To be free, he had to face his fear and listen to the song in his heart.”

The good guys wear white, the bad guys black in this oceanic opera, but the formula satisfies.