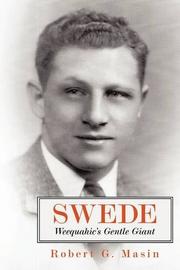 Masin’s portrait of his father, a renowned athlete of northern New Jersey in the ’30s and ’40s.

As historians turn more and more to intimately drawn, tightly focused stories of the Everyman to provide meaning and texture to the progress of time, this biography is just the kind of material they will seek out. Masin has written a loving story of his father, who, like all good fathers, was an exceptional man in his son’s eyes: generous (except with allowances), gentle, attentive and full of quirks and eccentricities. But the senior Masin, known as “Swede,” was also a star athlete—state champion in the shot put, voted most outstanding state player in basketball and All-American in soccer (when he happened to pick up the sport) and captain of three teams in college—as well as humble and a gentleman. So powerful and pervasive was Swede’s image in New Jersey that Philip Roth took him as the starting point for his character Swede Levov in American Pastoral. Like Masin’s father, Roth also graduated from Weequahic High School in Newark, N.J., and it is in drawing that city’s Weequahic section that Masin steps outside the personal and tackles the psychogeographic. He inspects not only the lay of this particular land, but the day-to-day life of his father’s part of town: where he hung out, the street life, school, socializing, food, architecture, theater, sledding in the park, liberal politics and more. Masin also explores how Swede was “this nice Jewish boy, living in a wonderful Jewish neighborhood, with kind Jewish parents,” a kid who rarely gave his parents grief, “but marrying a shiksa, well, that was devastating.” His parents managed to survive the devastation and the book pays nearly as close attention to Estelle’s Italian background as it does to Swede’s; a feisty, outspoken family, though Masin’s most evocative memory is the spaghetti and meatballs. Playfully teasing portrayals of the author’s brother and sisters adds a satisfying completeness to the Swede’s impact.

Affectionate, with a bracing air of locality—the kind of microhistory that will yield gold for more sweeping history projects.