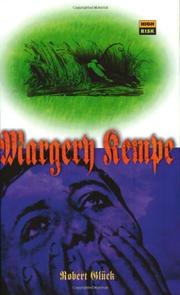 GlÅck pushes the envelope way too far as he attempts to use the history of a failed, would-be saint from the 15th century to explore his own romantic obsession in the 1990s. GlÅck (Jack the Modernist, not reviewed) admittedly embellishes the autobiography that Margery Kempe wrote during the 1430s to reveal the unhealthy psychology of this Jesus-crazed heretic. Margery is an upstanding woman, daughter of the mayor, wife of John, and mother of 14 children, who loses it when devils begin taunting her. But later, as she lies in the bed to which John has tied her because he's tired of her insane roaring, Jesus pays a visit, loosens her ropes, and inspires a passion that makes Margery swoon just looking at ``the semi-circles of his ass'' and the ``splayed tips of his long toes.'' Margery pretends to go on with her life, but all the while she's really waiting for Jesus in a heightened state of arousal. When he does show up ten years later, it's obvious there's going to be a whole lot of bumping and grinding going on. Unfortunately for Margery, Jesus is distant and cold (he absentmindedly counts his muscle twitchings during sex: `` `I spasmed eleven times,' he mused''), but this only makes Margery want him more. Classic victim mentality? Maybe. But GlÅck likes to think of it as Margery's modus operandi—she wants power, money, sex, prestige, and fame—and she needs Jesus to make the necessary connections to priests, vicars...even to God. If this isn't enough, the author sprinkles in his own unrequited-love story with a pretty little rich boy who refuses to make a commitment. Of course, GlÅck only gathers the strength to present his lover with a live-with-me-or-leave-me ultimatum when he sees how far Margery falls in her desire for the unattainable. Numbingly frenzied, frustrated, and futile.