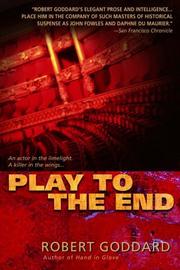 PLAY TO THE END

A fading actor is the latest of Goddard’s heroes-in-distress to reach this shore in a suavely paranoid tale first published in the U.K. in 2004.

What could be worse than headlining a lost Joe Orton play in a production that’s clearly destined to expire in Brighton before ever reaching London? Toby Flood finds out when his soon-to-be-ex-wife Jenny rings him up to ask his help in getting rid of a man who seems to have staked out her millinery shop. Accosted by Toby, meek Derek Oswin agrees to stop haunting Jenny’s shop, but then returns after all and insists that Toby has only one chance to learn more about his motives: a rendezvous that will require Toby to skip a performance of the Orton play. Toby’s absence infuriates his director and producer and ends up placing his understudy in serious jeopardy. What’s worse, though, is what he learns about Jenny’s intended, Roger Colborn. According to Derek, Roger swindled his brother and sister out of their shares of the family plastics firm, then sold off its principal asset and yanked the company out from under its loyal employees, many of them suffering from plastics-related cancers. Soon after these dire revelations, Derek vanishes, and a sudden death leaves Toby wondering just how far Roger will go to refute Derek’s stories before Jenny pulls out of their upcoming marriage. In less than a week, he’ll have his answer in the form of an increasingly intricate series of plots designed to discredit him. Roger is suitably monstrous, and Goddard unfolds the mystery layer by doomy layer in a gratifyingly professional way. But why, oh why, is Toby, like every other Goddard hero (Borrowed Time, 2006, etc.), so determined to get himself into deeper trouble by expositing himself to a more fiendish frame-up at every genteel step?