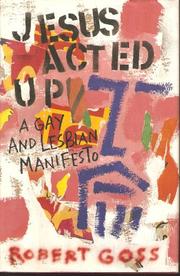 A Gay and Lesbian Manifesto

Former Jesuit priest Goss (an executive headhunter who's also a gay activist with a doctorate in comparative religion) starts this combative study by asking how gays and lesbians can be Christians. After explaining that Christ was ``queer,'' he concludes that gays and lesbians may be the only true Christians, and exhorts them to reclaim their Church. Drawing on the aggressive rhetoric of Act-Up and Queer Nation, the subtle logic of traditional Catholic theology, and the intellectual paradigms of Foucault, Goss creates out of ``subjugated knowledges'' a liberation theology—one that denies the universality and global theories of the institutional Church in favor of contextual theories, an ``inclusionary theology'' based on sociological, cultural, and historical change. Historically, the Church, the military, the legal system, and the medical profession stigmatized ``queers'' (Goss's word) as pathological, sinful, and deviant—and queers, the author says, responded with inhibition, shame, and internalized homophobia of their own, until the civil- rights movement, the women's movement, and the Stonewall Riots of 1969 helped empower them. Goss offers a ``transgressive'' theology to express the new gay freedom, proposing a Christ who manifests the erotic rather than denying it, who ``came out of the closet'' and became ``actively queer'' by his solidarity with the oppressed. Such theology requires a radical rereading of the Bible, of course- -a rejection of what Goss calls the ``Biblical terrorism'' that condemned homosexuality (a term Goss avoids because of its supposed ``medical'' connotations), identifying it with the heretical. Rather than exhorting gays to leave the Church, Goss calls for a reworking of Christian rituals such as baptism and the Eucharist to make them more relevant and inclusive, sacramentalizing ``queer'' experience. Identifying God with erotic power—with pleasure rather than denial—he envisions same-sex marriages, a queer clergy, and the assimilation of primitive religious concepts such as shamanism. Bold, wide-ranging, cerebral, cryptic (``God is HIV positive''), and utopian—with the charm of both prophecy and outrageousness.