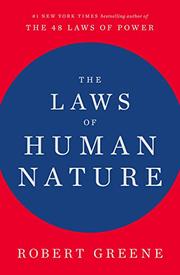 THE LAWS OF HUMAN NATURE

A follow-on to the author’s garbled but popular 48 Laws of Power, promising that readers will learn how to win friends and influence people, to say nothing of outfoxing all those “toxic types” out in the world.

Greene (Mastery, 2012, etc.) begins with a big sell, averring that his book “is designed to immerse you in all aspects of human behavior and illuminate its root causes.” To gauge by this fat compendium, human behavior is mostly rotten, a presumption that fits with the author’s neo-Machiavellian program of self-validation and eventual strategic supremacy. The author works to formula: First, state a “law,” such as “confront your dark side” or “know your limits,” the latter of which seems pale compared to the Delphic oracle’s “nothing in excess.” Next, elaborate on that law with what might seem to be as plain as day: “Losing contact with reality, we make irrational decisions. That is why our success often does not last.” One imagines there might be other reasons for the evanescence of glory, but there you go. Finally, spin out a long tutelary yarn, seemingly the longer the better, to shore up the truism—in this case, the cometary rise and fall of one-time Disney CEO Michael Eisner, with the warning, “his fate could easily be yours, albeit most likely on a smaller scale,” which ranks right up there with the fortuneteller’s “I sense that someone you know has died" in orders of probability. It’s enough to inspire a new law: Beware of those who spend too much time telling you what you already know, even when it’s dressed up in fresh-sounding terms. “Continually mix the visceral with the analytic” is the language of a consultant’s report, more important-sounding than “go with your gut but use your head, too.”

The Stoics did much better with the much shorter Enchiridion.