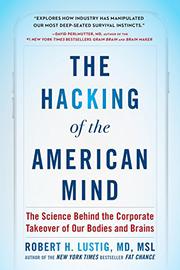 THE HACKING OF THE AMERICAN MIND

The Science Behind the Corporate Takeover of Our Bodies and Brains

I want my MTV—and my doughnuts and my meth. Thus the American mind, racing to attain rewards that entire industries are glad to supply.

Lustig (Pediatric Endocrinology/Univ. of California, San Francisco; Fat Chance: Beating the Odds Against Sugar, Processed Food, Obesity, and Disease, 2012, etc.), the chief officer of the nonprofit EatREAL, has written widely on the obesity epidemic, particularly among younger Americans. Here, branching out into realms such as neuroscience, sociology, and even theology, he looks at the reward system whereby the brain lives and dies via serotonin, cortisol, and dopamine, chemicals that drive us to have that one piece of cake too many—or to smoke, snort cocaine, stare into our cellphones, and watch game shows. Medical specialists treat effects, he argues, whereas we should be looking into root causes: not just the chemistry of the brain, driven to seek reward and vulnerable to falling into addiction, but also the economic machine that creates vast industries devoted to choking processed foods with reward-delivering sugar and putting an opioid-supplying pharmacy on every street corner. That economic machine is massively parasitic and spectacularly successful. Lustig leaves it to readers to connect the dots—as he writes, early on, “I’m not going to stick my neck so far out as to say that there has been a conspiracy between different industries and the government to purposefully inflict malice on the public”—and there are plenty of dots to connect. With so much to condemn, the argument is sometimes loose and scattershot, but there’s a lot to write about in the vast subject of how the brain works and how capitalism aims to satisfy its every craving, no matter how harmful to body, mind, and society.

At the edges where popular science and popular social criticism meet, with interesting if not always sharply limned arguments.