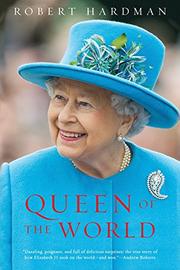 QUEEN OF THE WORLD

A portrait of Queen Elizabeth II (b. 1926) that highlights her many accomplishments.

As the longest-reigning monarch in British history, Elizabeth II is currently more beloved than ever. Recent acclaimed dramas such as the 2006 film The Queen and the hit Netflix series The Crown have further sparked our universal fascination, as each work has delved into Elizabeth’s more private life and aimed to reveal a woman with complex ambitions and passions. Daily Mail writer Hardman, who has written extensively on the British monarchy (Our Queen, 2011, etc.), approached this book alongside his current TV documentary. While not exactly serving as a companion book to the series, both vehicles assert a similar reverential approach to the material, choosing to elude the more personal dramas that have beset the royal family and focusing instead on the queen’s tireless work ethic and long-standing dedication to her role. Hardman examines the broader areas of accomplishment that have been particularly significant during her reign. “By any measure,” writes the author, “her life and reign comprise a vault of experience unrivaled by any world leader. It is one of the reasons that even those who are not royalists by inclination applaud her dedication to duty.” Rather than providing a linear account, Hardman looks at particular topics: the queen’s diplomatic accomplishments throughout the Commonwealth as well as Africa, Europe, and the U.S; her associations with various leaders, including her line of prime ministers and her close rapport with accomplished statesmen such as Nelson Mandela and the many American presidents who have come into power during her reign. “There can be few people in the USA, let alone the rest of the world, who have lived through the administrations of sixteen presidents—more than one-third of the total,” writes Hardman. The book is grounded in lucid historical detail and often highlighted by colorful anecdotes. However, as a full biography, the dense volume, while accessible, lacks an engrossing throughline to maintain lengthy reader engagement.

A respectful and thoughtfully documented history of the British monarch but not the definitive biography one might hope for.