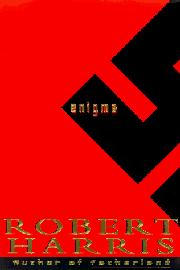 Harris' imaginative debut, Fatherland (1992), pulled off the big stunt of describing a Germany in 1964 that defeated Russia and survived WW II. Though this second novel re-creates wartime England as carefully as Fatherland built up a fictive Nazi Germany, it's no stunt. Detective-story elements remain in each but don't overwhelm the character-driven plots. Set in 1943, it focuses on cryptanalysis and spies at Bletchley, a railway town servicing a secret base where intelligence teams attempt daily to break the German code enciphered in Hitler's Enigma machines. Although the British capture a number of Enigma machines, the proud Germans think that without a key to the code in use, Enigma is unbeatable: "It never ended, this battle against Enigma. It was a chess tournament of a thousand rounds against a player of prodigious defensive strength, and each day the pieces went back to their original positions and the game began afresh.'' Kept largely to the rigorous innards of dark little Bletchley, where a crew of geniuses strives to save three huge American convoys now bound for England but sailing into a pack of over 100 U-boats waiting to savage them, Harris' is no cliche wartime England but a richly felt particular place and time. The story unfolds through the eyes of Thomas Jericho, a young mathematician who broke the Enigma code, then had a nervous breakdown, and has now been called back from his sickbed to break Enigma anew and save the convoys. Meanwhile, his love affair with a cryptographer sinks when she disappears, leaving Tom with the creepy thought that she's a spy. The search for his enigmatic lost love parallels his search to break the code.

A you-are-there re-creation you can crawl around in.