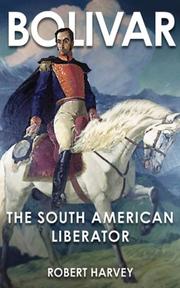 The Liberator of Latin America

Harvey (The Fall of Apartheid: The Inside Story from Smuts to Mbeki, 2002, etc.) sees in Bolívar’s evolution the epitome of the Romantic hero. He was a spoiled son of Venezuela who seized sobering ideas from his enlightened tutor and from far-flung travels to Europe, and, after a terrible clash with adversity, he joined the rebel movement against the Spanish oppressors of his homeland. Harvey examines Bolívar’s later greatness from his early revolutionary seeds. He was born to an independent-minded family from northern Spain that broke off from the Castilian state in the late 16th century to migrate, and Bolívar grew up within a charmed life in Caracas and demonstrated early on an ungovernable spirit. His formative experiences included being tutored by the unorthodox Simón Rodríguez, steeped in Rousseau’s Emile, his ill-fated young marriage (his bride died after less than a year) and witnessing the coronation of Napoleon Bonaparte, whom Bolívar had worshipped before he proved to be a “hypocritical tyrant.” Inculcated in the Spanish criollo system of feudalism, Bolívar had also soured on the oppressive Spanish reign that had denied his family a certificate of pure blood; he grew to abhor what he witnessed as the exploitation of Latin American resources and people “to satisfy the insatiable greed of Spain.” Harvey ably weaves the context around Bolívar’s daredevil vision to challenge the powerful Spanish empire built by central authority, the church and military. Later in life, Bolívar displayed the ruthlessness, daring and literary eloquence that would ultimately liberate millions of enslaved, illiterate South Americans and inspire a continent—as well as create a troubling legacy of authoritarianism that would wreak bloody havoc after him. An energetic, satisfyingly florid narrative that captures the passion and frenzy in this extraordinary life.