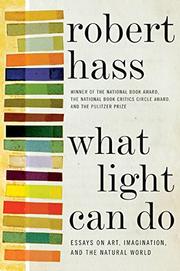 WHAT LIGHT CAN DO

Essays on Art, Imagination, and the Natural World

A winner of just about every major literary award exercises his considerable critical chops, ruminating on the works of poets, photographers, writers and other artists.

Hass (English/Univ. of California, Berkeley; The Apple Trees at Olema: New and Selected Poems, 2010, etc.) brings formidable gifts and experience to the art of criticism. He speaks with greatest authority about poets and poetry, as evidenced by his pieces about literary celebrities like Wallace Stevens, Allen Ginsberg, Robinson Jeffers, Czeslaw Milosz (whose works Hass has helped translate) and others. Hass also introduces Western readers to the Korean poet Ko Un and to Slovene and Chinese poets. In one section, he celebrates the work of California writers Jack London, Mary Austin and Maxine Hong Kingston. He also dives into the complexities of the Gospel of John, wrestles with the relationship between poetry and spirituality, highly praises the Border Trilogy of Cormac McCarthy (“a miracle in prose,” he calls The Crossing) and offers a swift, sensitive history of blacks’ servitude in the sugar, tobacco, cotton and rice fields. He ends with the text of a speech he delivered at Berkeley in 2009 about the controversy at that school over the removal of a grove of oaks to accommodate the athletic facilities. For that piece, Hass walked the ground, explored natural history and read stories about the founding of the university—in other words, he did his homework. Characteristic of all of these pieces, of course, is Hass’ great erudition (even bibliophiles may feel as if they’ve not read very much) but also a surpassing generosity of spirit, a determination to understand other writers and artists rather than to judge them.

Not for all readers, but prime in its class—literate, learned and wise criticism, with scarcely a breath of cynicism or disdain.