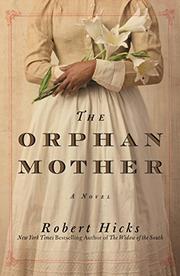 The Reconstruction Era was one of the messiest times in American history, not least because establishing civil and political rights for African-Americans newly freed from slavery was left unfinished for another century. That turmoil forms the setting for Hicks’ latest, located, as was its predecessor volume, in Franklin, Tennessee, just south of Nashville. Formerly a slave in the household of Carrie McGavock, the widow of Hicks’ title, Mariah Reddick has long been renowned as a midwife, and in this work she has built up both property holdings and local esteem. Her son, Theopolis, has empire-building desires of his own  that earn him a bullet and Mariah endless suffering; Carrie assures Mariah that “he was a special boy,” but that does nothing to ease the pain except to establish yet another bond between the two women, one forged in “grief and rage so inarticulate and so elemental that [Mariah] would come to rely upon it, like a cane or an extra toe, to give her balance.” Now the question is to find out who wanted Theopolis dead, and why. There is no shortage of suspects among the dispossessed planters and crofters “made poor and small by Reconstruction, their punishment for opposing the Republicans and fighting for the Confederacy.” The villain of the piece has murkier motives still, but Hicks nicely complicates what otherwise is a historical potboiler with the arrival of a soft-spoken African-American sleuth who digs into the mystery while nursing griefs of his own. Tole has reasons for going after the conspirators who murdered Theopolis, and though Carrie assures Mariah that as the town’s midwife “you’re the mother of everyone in Franklin,” it’s a hailstorm of avenging bullets and not kind words that makes this engaging novel pop.

Satisfying historical fiction, of particular appeal to readers who live near the banks of the Harpeth or Cumberland.