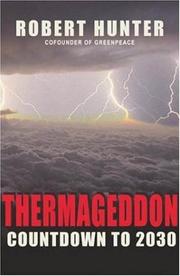 A credible warning of imminent ecological catastrophe, a nightmare brought about by greed, lies, denial, and inertia—to say nothing of SUVs.

You can be forgiven for assuming, thanks to the title, that this is some kind of bottom-of-the-barrel L. Ron Hubbard offering. But don’t be put off. Hunter, a cofounder of Greenpeace (Warriors of the Rainbow, not reviewed), does bring plenty of doom-and-gloom rhetoric and nightmare scenarios into play, but he also offers a healthy dose of good science in support of his overarching message, which can be condensed along these lines: Change your ways, postindustrialists, or come a quarter-century from now, the world is going to change in ways that will make life very difficult, if not impossible, for humans and other living things. Such messages are nothing new; as Hunter acknowledges, scientists have warned of global warming since at least 1957, when oceanographers observed that the world’s seas were absorbing less and less carbon dioxide and began to wonder where all that extra CO2 was going. What has changed, though, is an apparent unwillingness on the part of the general culture, and certainly the media, to treat such phenomena as a problem worth getting worked up about; “despite the existence of an instantaneous global communications system,” Hunter observes, the First World takes a business-as-usual attitude toward the environment, even as new “vehicles with internal-combustion engines are coming off the assembly lines around the world at the rate of one per minute” and the footprint of Americans and Europeans on the environment grows heavier and heavier, a pattern that will only increase as more and more nations become developed. What to do? Well, says Hunter, a little monkeywrenching might be in order—but so, too, is activism to press the cause of alternative energy and the like, and take note: a reordering of priorities to lessen individual consumption of resources.

“It took me years to stop smoking,” says Hunter. “It will take a while to learn to stop climate-wrecking.” Though he probably won’t reach the worst offenders, the author makes a good case for going cold turkey on Humvees, heated pools, and other deadly luxuries.