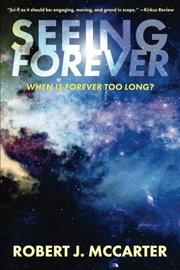 McCarter (Of Things Not Seen, 2017, etc.) returns with a tale of a man who defeats the limits of mortality only to question the worth of indefinite existence.

Paul Cruz once lived as a human being on 22nd-century Earth. At the time, the planet was recovering from elevated sea levels, displaced populations, and the resulting disease and wars that came with them, collectively known as the Shift. He was married to a woman named Viola, who took increasing comfort, as they grew older, in religion and its promised afterlife. Paul, however, wanted to become a “Singular” and upload his human consciousness to a technological platform called the Singularity. He did so at age 90, after learning of Viola’s death; they’d divorced some years before. After living in virtual worlds of varying quality and design for decades, Paul is now ready to settle at a place called “Home.” It’s a quaint virtual-seaside environment that feels real, even giving him the illusion of a sunburn. There, he meets a person named Simon, who has eyes that seem familiar. Paul recounts the story of how he and other Singulars once wrested their fates from the corrupt Osiris Corporation, which had been deleting people after invoking “obscure clauses in their contracts.” Paul’s history as a Singular is also entwined with the story of Hugh Rice, an architect of the Singularity who became his lover. In this quiet but far-reaching thriller, author McCarter explores the essence of what it means to be human. On worlds where one might become an animal, or even the wind, he shows how virtual existence could become “tiresome”: “If everything was THE BEST, then nothing was,” Paul narrates. McCarter doesn’t bog down the narrative with hard-science jargon, instead cleanly and clearly explaining how the upload process works: “they stop your biological functions, they take your brain apart a cell at a time, mapping each and every neuron.” The first half of the story is rather sinister, with Paul’s fellow Singulars June Grunwald and Kendall Rothschild vanishing, but concerns of the heart quickly take center stage as Paul discovers that “Love shouldn’t be contained or constrained by the accident of gender.” The ending, which brings the discussion of the afterlife full circle, hints at a sequel.

Sci-fi as it should be: engaging, moving, and grand in scope.