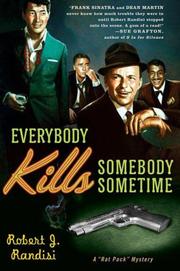 EVERYBODY KILLS SOMEBODY SOMETIME

Dean Martin’s been getting hate mail, half a dozen variants of “If you’re not careful you could get real hurt” in the usual block capitals. It’s proving worrisome to Frank Sinatra, in town with the Rat Pack for a three-week shoot on Ocean’s Eleven. He calls on Eddie Gianelli, the Sands Casino’s hip pit boss, for help. Why me? Eddie wonders. Well, Frank has asked around, and the word is that when smart money needs something done in Vegas, it gets Eddie G. So the reluctant contractor, who’s certainly wired, goes to work, asking questions among the gamblers and showgirls of his vast, eclectic acquaintanceship. But someone’s not at all happy with the waves he’s making, and before long, bad things begin to happen: three murders, two adjunctive shootings and the painful pummeling of Eddie himself, capped by a serious attempt to take him out permanently. Finally, however, Eddie sees the light in time to earn the gratitude of Frank, Dean, Sammy, Joey, Peter and, yes, even Jack Kennedy.

The plot’s feeble, and the prose limps. If Sinatra et al. were really as colorless as Randisi (Same Time, Same Murder, 2005, etc.) renders them, they’d be known as the Snore Pack.