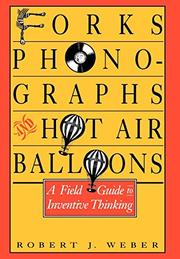 A Field Guide to Inventive Thinking

First-time author Weber (Psychology/Oklahoma State) on how inventions—from doorknobs to Velcro—come to be. Weber sees invention as ``the connection between technology and the creative spark or crawl of the mind.'' Often, this connection is made by ``parsing''—dividing an invention into its parts or procedures. Thus, the Wright Brothers achieved motorized flight by parsing their goal into problems of lift, power, and control, and addressing each in turn, while rival aeronauts with greater financial resources failed through inadequate analysis. Weber gives lessons on how to describe, compare, and evaluate inventions: An elaborate chart detailing differences between nail and screws is typical and may lead some to wonder whether the writer is belaboring the obvious. Fledgling inventors may be more enthusiastic over Weber's discussion of ``heuristics,'' a ``rule of thumb for generating ideas or for solving problems.'' Heuristics range from repetition (``once an interesting component is discovered...try copying or repeating it as often as necessary'') to linkage (``try joining those tools or devices that undo the actions of one another. These are often useful combinations'') or transformation (how did the tooth evolve into the saw?). Upon this rather abstract loom, Weber weaves the story of dozens of devices, from forks to coffeepots to screws. He dotes on handles and containers (the latter involved in everything from tea bags to cooking pots). Invention is more than objects, as he shows by parsing a supermarket into the various shopping ``procedures'' that make it tick. A final chapter, on gene splicing between different species, draws some doubtful parallels between ancient mythology and modern gene splicing, and is notable for failing to address the moral issues involved. Covers some of the same ground as Henry Petroski's The Evolution of Useful Things (p. 1297), with less flair but more hands-on advice. (Thirty illustrations.)