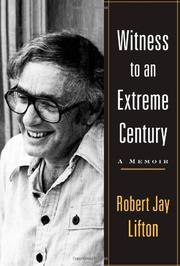 WITNESS TO AN EXTREME CENTURY

A memoir by a courageous psychiatrist and National Book Award winner whose life's work has been the study of why fundamentally decent individuals commit evil acts.

In 1958, after serving in Japan as a military psychiatrist, Lifton (Psychiatry/Harvard Medical School; Superpower Syndrome: America's Apocalyptic Confrontation with the World, 2003; etc.) had the opportunity to interview American servicemen captured during the Korean war by the Chinese, who "had managed, at least temporarily, to gain considerable control over [their] minds.” In his discussions with the soldiers, and with missionaries and Chinese intellectuals who had fled the mainland and were living in Hong Kong, the author recognized that at another level, this same thought-control process that had been inflicted upon the entire Chinese population over decades. This was the subject of his first book and became the catalyst for a shift in his life from his intended career as a Freudian psychoanalyst to becoming what he calls a "psychohistorical researcher"—part of the informal but influential group of social scientists that included Erik Erikson and David Riesman. Lifton writes that it was his work with Hiroshima survivors that "was the shock that permanently changed [his] way of relating to the world." It became his prism for judging "conflicts between nations and groups, political violence of any kind, and even psychological struggles of individual people.” It also informed his studies of the participation of German doctors in the extermination of Jews in concentration camps, the My Lai massacre of civilians by U.S. troops in Vietnam and the more recent examples of the use of torture by U.S. soldiers against enemy combatants—all of which exemplify how average people can be led by circumstance to commit atrocities. A call for a moral awakening by a deeply compassionate chronicler of our times.