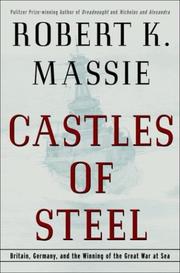 Britain, Germany, and the Winning of the Great War at Sea

A monumental study of the maritime aspects of WWI, drawing on a great cast of characters and revisiting little-known battles and watery tombs.

Massie is an accomplished maker of knee-buckling tomes (Loosing the Bonds, 1997, etc.). Here, picking up where his Dreadnought (1991) left off, the author begins with the logical outcome of what happens when two contending powers—in this case, Germany and England—fit themselves with world-girding, phenomenally well-armed fleets: they take the fight out to sea. The First World War saw a military innovation in the widespread, even unrestricted use of submarines, and Massie breaks news by revealing that the Germans had a clear opportunity to sink the Lusitania’s sister ocean liner Mauretania but did not. U-boats had an advantage over Allied submarines in that British ports and harbors tended to be deep, whereas German harbors were too shallow to attack submerged; the Allies, one might conjecture from reading Massie’s pages, also didn’t really know how to make use of submarines as tactical weapons. They did, however, finally figure out how to deploy convoys and submarine-killing “Q-ships” late in the war, a development Lloyd George claimed as his own. (“ ‘The little popinjay,’ ” remarked First Lord Edward Carson on reading George’s claim, “has told ‘the biggest lie ever was told!’ ”) Massie devotes a full sixth of his study to the critically important Battle of Jutland, which yielded a pyrrhic victory for Britain at tremendous cost—the loss of three battle cruisers, two light cruisers, and many other craft. He refutes earlier historians’ claims that the result of the battle was to confine the German fleet to home waters, when in fact it came out in force three more times—once to shell the coast of Scotland. Massie’s account has plenty of heroes (Jellicoe, Scheer, even Winston Churchill), villains and dunderheads (Kaiser Wilhelm II, Lord Beatty) and clashing egos to match all those battles at sea, and well reveals his mastery of period detail.

Hardly a page-turner, but a vivid account that will satisfy anyone with an interest in the Great War.