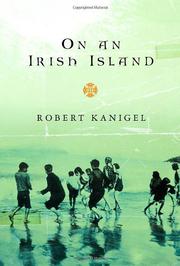 ON AN IRISH ISLAND

A richly detailed biographical study of a group of early-20th-century intellectuals whose shared love for a dying insular culture helped save it from extinction.

Kanigel (Faux Real: Genuine Leather and Two Hundred Years of Inspired Fakes, 2007, etc.) displays his abundant erudition and narrative finesse in this story of how four European intellectuals—classicist George Thomson, British Museum curator Robin Flower and linguists Carl Marstrander and Marie-Louise Sjoestedt—found their lives forever changed by encounters with the people of Great Blasket Island, off the coast of Ireland. The four traveled to this remote island at different times and for different reasons. Thomson followed the suggestion of his friend and fellow Celtophile Flower and went to Blasket for the “Gaeltacht,” the Irish culture which had already enchanted Flower. Marstrander, a Norwegian, sought to examine the linguistic links that bound the Vikings to the ancient Celts. The sophisticated Parisian Sjoestedt sought the opportunity to study one of the most complex linguistic systems in the world. Although the islanders lived in "primitive" conditions, all four visitors became enthralled by the rich island culture. Interwoven among these overlapping, sometimes intersecting biographies are other stories, including that of playwright John Millington Synge, who went to the island to learn spoken Irish; and those of the men and women the four scholars befriended, loved and inspired. Thanks to their influence, dialect-rich folktales and life histories that would otherwise have perished found their way into Irish literary history. The portraits in this book are classic Kanigel: lively, sympathetic and thoroughly engaging. Yet what makes the narrative so affecting is the loss that permeates the text. As cultures like those on Great Blasket continue to be destroyed by the march of progress, so too are our connections to a simpler, more personally fulfilling way of living.

A mesmerizing interplay of lives and socio-historical contexts.