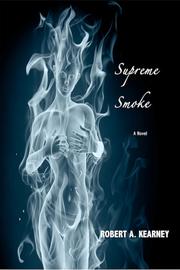 by Robert A. Kearney

A female justice scheduled to review a landmark case is threatened with blackmail.

In Chicago, a civil jury awards $100 million in compensatory and punitive damages after a smoker dies of cancer. The damages are to be borne equally by the company, Icarus Tobacco, and its executives. It’s a seminal case in that liability has been conferred not only upon the organization, but also upon its principals, which could make employment in the industry a crime. In D.C., the U.S. Supreme Court convenes and agrees to “grant cert”—i.e., judicial review—of the case Icarus v. Burke, which, in the words of one justice, sets a “dangerous and pernicious precedent.” The nine justices are of various ages and persuasions, including a Hispanic chief justice and the court’s first African-American female justice, Aurora Sims. President Cray, assisted by his henchmen, does his unethical best to ensure a pro-tobacco resolution. The greatest pressure is on 39-year-old Aurora, whose personal history yields some compromising photos that make her an ideal target for blackmail. But Icarus’ benefactors may be flying too close to the sun. The story is crisp and well-written, and the legal analysis of the case, along with the motivations and proclivities of the justices, has a ring of truth. Aurora, whose quiet beauty and gentility mask the steel beneath her skin, isn’t going down without a fight. Pacing is even, as the author touches on each of the justices, as well as the actions of an opportunistic intern. There’s plenty of material to mine, including sexual harassment, an extramarital affair, emotional and mental instability and betrayal. On the downside, the character of scheming President Cray approaches caricature; the surname of a minor character changes from page to page; and at times, closing quotes are omitted in the dialogue. Still, the story is strong, particularly its theme that a woman’s indiscretion carries much more weight than her male counterpart’s.

A tight, gripping tale with a few flaws and an authentic Supreme Court setting.