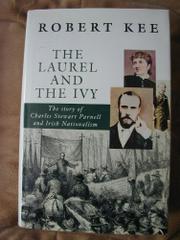 THE LAUREL AND THE IVY

The Story of Charles Stewart Parnell and Irish Nationalism

This study of Irish leader Charles Stewart Parnell's impact on Irish nationalism and on the course of British politics traverses an already well-traveled road. Prolific English historian Kee (1939: In the Shadow of War, 1984, etc.) brings to Irish history a careful, unimpassioned view, which is useful in tracing the evolution of Parnell, an Anglo-Irish Protestant landlord with little early interest in politics, into a leader who embodied and directed the nationalism of the Irish people. After entering the House of Commons at the age of 28, Parnell quickly brought the art of obstruction to new heights, became chairman of the Home Rule party within six years, and within five more had brought the Liberal Government to the point of introducing a Home Rule Bill that would have been considered ``no more than a rhetorical chimera'' when he first entered Parliament. In doing so, he helped turn out two British governments, one Liberal and one Conservative, and, by maneuvering the Liberals into adopting Home Rule, helped to turn out a third. He did so by a remarkably skillful use of parliamentary procedure, by creating the first disciplined democratic party of modern times, and by maneuvering to hold the balance of power between the Liberals and the Conservatives. He remains, however, as Kee notes, an elusive figure, and it is hard now to understand why British Prime Minister William Gladstone called Parnell the most remarkable man he had ever met. His fall was as swift as his rise; he was cited as co- respondent in the divorce petition of one of his colleagues, Willie O'Shea, and the scandal compromised the course of Irish nationalism for the next generation. Parnell died in 1891 at the age of 45, just four months after he had married his mistress. A careful, considered, judicious biography, but uninspired and oh, so long.