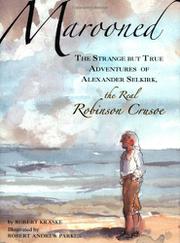 The Strange but True Adventures of Alexander Selkirk, the Real Robinson Crusoe

Any account of this Scottish navigator’s adventurous career would make absorbing reading; Kraske adds unusual dimension by enlarging on the historical record with credible insights into his character as well. Sent off alone, with minimal supplies, to an uninhabited island far from the Chilean coast after a clash with his ship’s captain, Selkirk learned survival skills through trial and error as he slowly adapted to the total lack of human company. Rescued more than four years later, he went on to become a successful privateer, and even a celebrity. However, too changed by his long isolation to fit back into human society, he ultimately enlisted in the Royal Navy, and died at 41 of a tropical disease. Kraske concludes with sketches of Daniel Defoe’s tumultuous life and the genesis of Robinson Crusoe, plus a visit to Selkirk’s island today and a research note. Enhanced by a map and by Parker’s offhand, full-page portraits at the chapter heads, it all makes a grand, poignant tale. (bibliography) (Biography. 10-12)