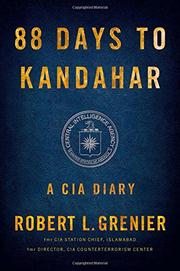 Former CIA officer Grenier delivers an action-packed tale, rich in implication, of the post-9/11 race to unseat the Taliban and rout al-Qaida in Afghanistan.

A field agent who “had a huge natural advantage over desk-bound, bookish analytic types” in having vast experience in both Central Asia and in the paramilitary operations of the CIA, the author was called on immediately after 9/11 to examine the internal politics of Afghanistan and help develop national policy (against, he notes, the CIA’s brief “to inform policy, never to make it”) on the brink of the American invasion of 2001. Grenier’s recommendations were nuanced, allowing even the Taliban some face-saving means of separating from al-Qaida. Among his other tenets: The United States should avoid giving the appearance of taking sides in a civil war that had ethnic dimensions, and “the U.S. effort should always be in support of Afghans, rather than the other way around.” The author’s memoir of transforming from disaffected longhair into dedicated warrior sometimes reads like mere filler, but his critique of what became of that plan is devastating: As he notes, we have broken the china and are now in a rush to flee the shop, while carefully forged alliances are unraveling and supposed allies are casting their eyes in other directions for friends. He opens, darkly, with the hope that the lessons his narrative offers will be useful as we prepare for a third Afghan-American War, having narrowly won the first and botched the second. Apart from his taut, well-written account of action on the ground, its heroes mostly gnarly Special Forces troops and spooks, CIA watchers will be fascinated by Grenier’s look at the twisted, surprisingly nasty politics within the intelligence community in the age of Bush/Cheney and their appointees, squabbling that makes Afghanistan look tame.

A catalog of occasional victories and constant missteps that is eye-opening, illuminating and maddening.