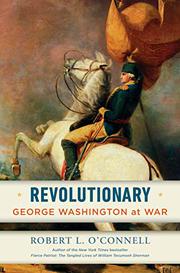 A provocative biography arguing that George Washington’s greatest accomplishment was guiding a rare revolution that turned out well for the revolutionaries.

Veteran historian O’Connell (Fierce Patriot: The Tangled Lives of William Tecumseh Sherman, 2014, etc.) reminds readers that most subsequent revolutions featured mass murder and ended in tyranny. In the first half of the book, the author travels familiar ground but does it with insight and wit. An unapologetic patrician, Washington yearned to scale Virginia’s aristocracy and Britain’s military. He succeeded in the first, becoming a leading figure in the French and Indian War and marrying Virginia’s richest widow. His failure, despite aggressive lobbying, to receive a royal commission was Britain’s first great mistake. A member of Virginia’s House of Burgesses, he dutifully supported opposition to Britain’s clumsy attempts to tax the colonists. By the time fighting broke out in 1775, everyone knew that Washington wanted to lead the army because he arrived at the Continental Congress in full dress uniform. Modern historians snicker, but it resonated with contemporaries, already impressed by his dignity, modesty, and reputation. He was the unanimous choice. O’Connell points out that Britain had long been crushing rebellions in Ireland and Scotland and saw no reason to change tactics in America. Even discounting patriot propaganda, looting and rape were common, prisoners were treated badly, and commanders known for cruelty were mostly British. Scholars wonder at his deference to the ineffectual Continental Congress. As generalissimo with a loyal cadre, he could have taken charge at any time but never did and expressed outrage when others suggested it. “He fervently believed in his own high-mindedness and was determined to conduct himself accordingly,” writes the author. “Nothing compromises morality like a long, violent revolution, and George Washington…remained a bulwark of decency, a remarkable achievement and possibly his greatest contribution to the Glorious Cause.”

A delightfully convincing case that Washington was history’s least ruthless and most successful revolutionary.