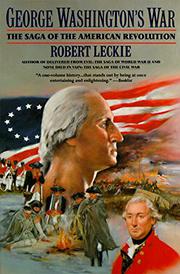 GEORGE WASHINGTON'S WAR: The Saga of the American Revolution

Leckie (None Died in Vain, 1990, etc.) retreads familiar terrain in lively style--in this retelling of the story of the American Revolution. Beginning with a recapitulation of the French and Indian War--which, though ending in British victory, represented the beginning of the end of the British empire in America--Leckie briskly recounts the well-known events leading to America's break with Britain and the military development of the war. In anecdotal biographical sketches, he draws vivid portraits of the war's principals: George III, George Washington, Thomas Gage, Lord Cornwallis, and Benedict Arnold, among others. Leckie summarizes the principal battles of the war--Lexington and Concord, Bunker Hill, Washington's disastrous Long Island and Manhattan campaigns, his victories at Trenton, Princeton, Saratoga, and Yorktown--in lucid, workmanlike fashion. In superb depictions of the British leaders and of the British home front, he also adds details rarely found in popular American histories, and, unlike some historians, he doesn't neglect the southern war--the battles of Camden, Cowpens, and King's Mountain are covered as thoroughly as any. But although Leckie is a superior narrator of military and personal dramas, he offers no particularly interesting interpretations of the war's events, and he limits his reflections on its aftermath to praising our constitutional government as ""an ideal of perfection in representative government."" Short on analysis, but, still, an enjoyable popular history.