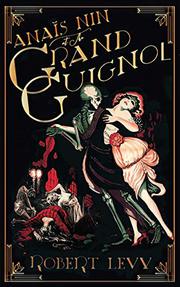 ANAÏS NIN AT THE GRAND GUIGNOL

Levy (The Glittering World, 2015) imagines a lost diary from a legendary author, set amid the decadence and eroticism of Paris’s premier horror theater.

In 1933 Paris, Anaïs Nin languishes in her marriage to her husband, Hugo, only feeling alive when in the arms of her lover, Henry Miller, or writing in the pages of her extensive diary, which documents her “mirror life,” as her therapist terms it. When Henry’s wife, June—who’s captured Anaïs’ heart, perhaps even more than Henry has—leaves for New York City, Anaïs seeks solace in the grotesque, ribald productions of the Grand Guignol, about which she writes: “The Theatre du Grand-Guignol is nothing if not an ideal night out for the amorous, lovers who innocently enter the small Pigalle black box only to cling to each other in paroxysms of laughter or fright, the emotionally heightened scenarios blossoming like poisonous flowers upon the stage.” There, she meets the actress Paula Maxa, the so-called “Maddest Woman in the World,” who bears a fleeting resemblance to the absent June. In Maxa, the writer finds a new obsession—one to help fill the loneliness that has haunted her all her life—but for the actress, there is another: Monsieur Guillard, who stalks the streets of the theater district dressed in black. Soon, he begins to haunt Anaïs’ dreams—and then her reality. Levy’s prose is ornate and styled to evoke the emotions of his narrator and her sensuous milieu: “My dark desires, they have long carried a vast and primitive voluptuousness capable of opening doors between places I once thought locked forever.” With it, the author manages to effectively conjure his setting, but the illusion dissipates in the dialogue, which reads as more contemporary in style than it should. Still, the novel is phantasmagoric and appealingly melodramatic, and deeply rooted in Anaïs’ personal demons. The novel’s conclusion is surprisingly poignant, as well. Readers looking for a concentrated cocktail of Années folles splendor will find that this short erotic novel quenches their thirst.