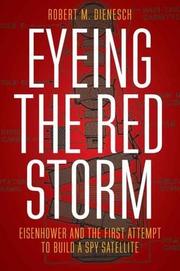 Eisenhower and the First Attempt to Build a Spy Satellite

A study of how the Dwight Eisenhower administration created the first U.S. satellite reconnaissance mission.

The desperate need for better intelligence of Soviet strategic capacities plagued the post–World War II presidencies of Harry Truman and Eisenhower, gaining special urgency in the wake of the Soviet Union’s launching of Sputnik on Oct. 4, 1957. Canadian historian Dienesch (Univ. of Windsor, Ontario) examines how the shock and terror that the orbiting of the Sputnik satellite instilled in the American public and the Eisenhower administration proved the catalyst for the implementation of the American reconnaissance satellite program, which was up and running only 34 months after the Russian’s launch. The WS-117L program, the precursor to the more successful Corona satellites, was the prototype, engineered during the early years of the Eisenhower administration by the U.S. Air Force and cloaked in secrecy. Dienesch asserts that very little has been written about this precursor, dwarfed by research on the later Corona program, which the CIA took over from the Air Force. To understand the later triumphs, the author steps back to look at Eisenhower’s initial motivation. The threefold challenges Eisenhower faced were to protect the U.S. from Soviet aggression, to establish economic security (the economy was besieged by the huge increase needed for defense spending to combat this threat), and to withstand the pressure from the military, which was whipping itself into a state of overmilitarization. Deterrence and containment were the new watchwords, and a satellite that would monitor the Soviet Union was the answer. The author looks at the RAND development of the satellite from 1945 to 1954 and how the satellite was supposed to retrieve film, though it suffered from management and other problems and was retired by the end of Eisenhower’s second term, replaced by Corona.

While WS-117L was not entirely successful, Dienesch asserts in this solid, specialized scholarly study, it laid the foundation for the U.S. space effort for the next 40 years.