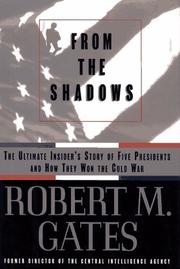 A career undercover man who reached the top of his furtive profession (as director of the CIA from late 1991 through early 1993), Gates sheds considerable light in this wide-angle memoir on the ways in which the craft of intelligence influenced government policy during the height of the Cold War. Focusing on the undeclared conflict that pitted the US against the USSR and its client states in venues ranging from Afghanistan to Poland, the author offers a notably candid chronological evaluation of what his agency contributed (or did not contribute) to the last 25 years of America's war against Communism. He also provides telling detail on the homefront hostilities in which CIA officials battled their counterparts at other agencies, justifiably wary lawmakers, and investigative reporters to remain in the good graces of the White House. Gates also explains that dÇtente was the Nixon administration's pragmatic response to the CIA's failure to foresee the Soviet military buildup that began during the late 1960s, producing a singular shift in the global balance of power. He goes on to show that there was appreciably more continuity than is generally perceived between the Carter and Reagan eras, as far as effective challenges to Moscow's zeal for geopolitical adventurism were concerned. Covered as well are the CIA's prescient take on Mikhail Gorbachev's ouster, the agency's surprise at the overnight success of the Velvet Revolution that signalled the end of the Warsaw Pact, the cost of institutional lapses (including the treachery of Aldrich Ames), and the several secret CIA-KGB summits. The vetted text delivers a surprising measure of jocose particulars and tricks-of-the-trade disclosures. Nor does Gates neglect to settle some scores with out-of-office mandarins (George Schultz and others) who beat him into print. A silent-service veteran's genuinely engrossing from-the- inside-out appraisal of an eventful period in the history of the US and the wider world. (Author tour)