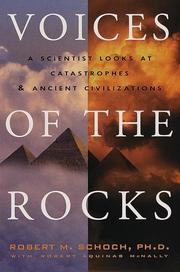 VOICES OF THE ROCKS

A Scientist Looks at Catastrophes and Ancient Civilizations

Geologist Schoch recaps the importance of comets, asteroids, fireballs, and like objects striking our planet, and how they may change the way we view the march of time. Despite some grandiose claims early in this book about an imminent scientific revolution’skewering uniformitarianism, subverting historical linearity—Schoch, an associate professor of science and mathematics at Boston University, covers material on the implications of catastrophe that is well trafficked and nearer to orthodoxy than avant-garde. He prefers the punctured- equilibrium mode of evolutionary change as it impinges on everything from culture to physiology, as do many scientists, though he would have readers believe the scientific community is a colossus of gradualists. Of primary concern to Schoch are the consequences of the earth colliding with substantial extraterrestrial materials, like what is thought to have had a hand in the extinction of the dinosaurs. He then proceeds to speculate on an upcoming close encounter with the Oort cloud, raining debris that could spawn not simply a global winter but perhaps the type of event that may have vaporized ancient civilizations, from the Bronze Age collapses to the greatest erasure of all, Atlantis. None of this is new, nor are Schoch’s breathless explanations of Gaia or tectonics or precession. What he has contributed that’s new—an erosion-based dating of the Sphinx to 2,000 years before the conventionally accepted 2500 b.c.—is a pleasing wave in the placid waters of received opinion. Yet, without more evidence, his possible dating remains a tantalizing mystery. A sensible popular guide to geo-catastrophic events, compromised by the hot air of the opening pages (—I have become convinced that we are in the midst of a profound scientific paradigm shift”), which makes the book feel like a tabloid recycling of yesterday’s news, since readers will likely already know of these incidents. (25 b&w ilustrations)