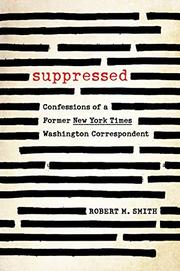 A former journalist’s memoir serves as a call to reinvigorate investigative reporting.

Lawyer and mediator Smith, a former New York Times Washington correspondent, mounts a sharp critique of journalism in his frank, often digressive debut memoir. Smith contends that “suppression of news is alive and well, even at the New York Times,” reflecting both editorial bias and the media’s cozy relationship to those in power. “Power,” writes the author, “oozing from the paper, forms a protective barrier around its correspondents and editors. People shy away from offending Times reporters,” fearing bad publicity. Smith recounts an accomplished career: education, jobs, salient assignments, and battles won and lost. The son of Eastern European immigrants, he attended the prestigious Boston Public Latin School, went on to Harvard, spent a year in Germany as a Fulbright Scholar, and continued his education at the Columbia Graduate School of Journalism. Characterizing himself as naïve, he was disillusioned when, working at Time magazine, he saw news manipulated to fit the publications’s conservative views. Smith also encountered suppression elsewhere, including the Boston Herald and the Times. Central to the memoir is one traumatizing incident: With evidence from a trusted source, he learned about the Watergate break-in, but when he brought the story to his editor at the Times, it was ignored, to his astonishment and dismay. The paper’s failure—or refusal—to cover the story “was the result of conscious bias,” he insists, which still shapes whatever the paper sees fit to print and has evolved into “reflexive, unconscious bias” that, he believes, thwarts its efforts to effectively undercut critics like Donald Trump. Frustrated with reporting, Smith opted for the law. In the intellectually stimulating atmosphere of Yale Law School, he began to see the world not as black and white but “a dubious gray.” Smith cautions readers to watch out for bias, ask who is reporting, and consider outside pressures that influence a paper’s focus.

A forthright indictment of the media’s shortcomings.