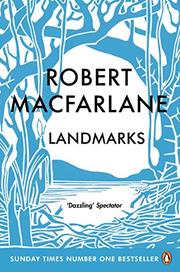 A prizewinning naturalist explores the connection between what we say and how we see.

“A basic literacy of landscape is falling away,” writes Macfarlane (The Old Ways: A Journey on Foot, 2012, etc.) with regret. “A common language—a language of the commons—is getting rarer.” He was dismayed when a new edition of the Oxford Junior Dictionary eliminated words such as acorn, catkin, heather, and nectar in favor of blog, broadband, and voicemail to reflect, the publisher explained, “the consensus experience of modern-day childhood.” In this fascinating, poetic compilation of vocabulary invented to describe the natural world, the author aims to “re-wild our contemporary language for landscape” and enrich our “vibrancy of perception.” “Language is fundamental to the possibility of re-wonderment,” he writes, “for language does not just register experience, it produces it.” Throughout, Macfarlane chronicles his peregrinations across different landscapes, including flatlands, highlands, water, coast, and woods, sometimes in the company of friends, often with references to nature and travel writers he admires (Roger Deakin, John Stilgoe, and Barry Lopez, to name a few) and to earlier word researchers. Each chapter is followed by a glossary of terms for aspects of “land, sea, weather and atmosphere” gleaned from English, Gaelic, Cornish, Welsh, Breton, and other dialects of the British Isles. Readers will discover, for example, that a “bunny bole” names the entrance to a mine in Cornwall; a “lunky” is a “gap in a fence or dyke (big enough to let sheep through but not cattle)” in Galloway; “oiteag” is Gaelic for a “wisp of wind”; and in Shetland, “skub” describes “hazy clouds driven by the wind.” Macfarlane has found 50 words for various permutations of snow, including “ungive” to describe thawing, in Northamptonshire. Many terms, the author contends, function as “tiny poems that conjure scenes.”