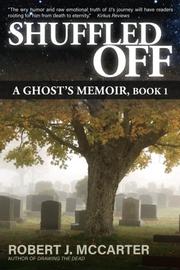 When 29-year-old janitor JJ Lynch is tragically killed by a drunk driver, he uses tools found in a university lab to communicate with those he’s left behind.

McCarter has turned the grief memoir on its head by exploring loss from the first-person point of view of his newly departed protagonist, struggling to shuffle off this mortal coil. In life, JJ befriended Tamara, a scientist experimenting with electromagnetism in an effort to reach her murdered fiancé; after his own untimely passing, JJ uses Tamara’s experiment to send her a series of “Transmissions” from the other side. This storytelling device is original, and JJ’s transmissions are well written and often irreverent. In between, though, McCarter includes sketchily written “Interview Transcripts,” in which JJ’s loved ones react to his messages from beyond. Here, the author misses the opportunity to flesh out the experience of those left behind, more deeply linking the novel’s frame—the laboratory experiment—with JJ’s “memoir.” There are other missed opportunities, as well. Tamara’s fiancé died trying to tell her something, but this intriguing thread is left unresolved, as is another memorable episode in which new spirit JJ is threatened by a gang of ghostly bullies. McCarter has grounded his paranormal narrative in the “reality” of numerous accounts of near-death experiences, such as the “silver cord” connecting the soul to the “meat,” or body, but there is much for the rookie ghost to learn on the fly. While coming to terms with his accident, JJ is consumed by flames of rage as he seeks retribution for his death, sinks into a vivid, horrifying slough of despond known as the bardo (a Buddhist concept) and fights desperately to intervene as his best friend is about to be murdered. McCarter’s spirit world can also be playful and fun, particularly his account of the “Midnight Circle,” at which a motley assortment of ghosts gather to perform Shakespeare and Samuel Beckett. It is to the author’s credit that, even though his main character is “extra corporeal,” JJ’s heartrending passage, kicking and screaming, through Elisabeth Kübler-Ross’ five stages of grief for his lost life, is relatable for any reader who has lost a loved one too soon.

The wry humor and raw emotional truth of JJ’s journey will have readers rooting for him from death to eternity.