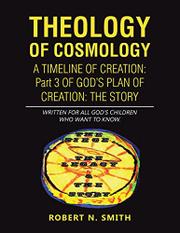 Written for All God's Children Who Want to Know

A book that looks at theology and cosmology through the fullness of time.

Smith (God’s Plan of Creation, 2014) offers a worthwhile companion to his earlier work, illustrating many of its key points while also covering additional material. In this slim volume, he attempts to explore history from a cosmic and theological perspective. He describes all of creation as coming, both materially and spiritually, from the “One God”—the maker of a vast system of heavens and universes, as well as the creator of advanced spiritual beings to rule over them. These sentient entities, the author says, have the freedom to stay in heavenly realms as angels or to explore the vast universe; every human being, he says, is such an entity. Smith also states that he believes that these beings exist far beyond Earth: “Anyone that thinks God in all His wisdom would create such a vast creation and only put living people, like us, on this small and insignificant planet…is on a great ego trip.” Uninitiated readers of this work will likely be lost in a maze of unfamiliar terms and ideas, which he discusses without references of any kind. After a thorough introduction to his concept of cosmology, for example, the author launches into a complex timeline beginning “Approx. 20 trillion years ago” and ending at the start of Jesus’ ministry. Despite the timeline’s length, however, a large part of it specifically concerns Jesus, whom the author identifies as a manifestation of “Christ Michael,” the ruler of the local galaxy. Throughout, Smith provides numerous, uncited details of Jesus’ life that aren’t recorded anywhere in traditional sources, including the names and birth dates of his siblings, his devotion to playing music, an accident that he suffered in a sandstorm, and a teenage girl named Rebecca who wanted to marry him. Overall, Smith’s work is intriguing, and his use of graphics often makes his ideas more accessible and even entertaining. However, traditional Christian readers will question some of the book’s more fantastical—and unfortunately, uncredited—claims.

A visually appealing treatise hampered by a lack of references.