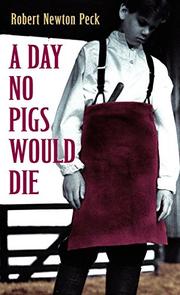 A DAY NO PIGS WOULD DIE

Clean as a whistle, almost that first one, this deals with an earlier Robert Peck's growing up and coming of an age in a Shaker household in Learning, Vermont, round and about the time of Calvin Coolidge. And with a "nevermind of fuss" it asseverates not only the precepts of the "Plain People" which go "back to reason" but values which have almost gone out of style. Values — or just truths, homely and harsh, as well as feelings which are genuine and nice, and that well-schooled lesson about a time to live and a time to die and a time to put away childish things. The whole success of this slight book is predicated on just that since certainly you can anticipate what will happen under the foreordained circumstances — since Robert's father is a pig killer — an honest but literally stinking way to earn a living — and Robert is given a pig as a reward — "just enough pink to be sweet as candy" and to be called Pinky. . . . The publishers expect this to be a book for the and all ages and certainly considering the success of Jonathan Livingston Seagull there is justification here. American heritage verities, in a nutshell, and the kind of sentiment many people cotton to.