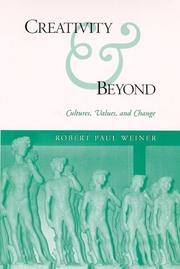 With much enthusiasm but little focus, Weiner’s history of creativity dulls the intellect even as it attempts to stimulate the soul.

In his overview of creativity in the western world, Weiner skims the historical and literary record from the Bible to the Dalai Lama (taking into account nearly everyone and everything in between) in order to consider the multiple meanings that creativity has held for humanity throughout the centuries. Despite this laudable objective, Weiner’s project collapses under the weight of its own scope—which is too massive to be organized in a single concise volume. The entire Middle Ages, for example, warrant a mere eight pages of text, while another equally unwieldy chapter condenses the innovations of the Romantics, the Victorians, and the Modernists into one freeforall of creative frenzy. A consideration of the cultural variables that influence perceptions of creativity follows this brief history, concluding with a puzzling investigation of recent Chinese history and its effect upon the creation of a new national identity. The great failing of Weiner’s study thus lies in its failure to stick to a working and meaningful definition of creativity: The formation of China’s national character is an interesting question, of course, but to view national identity formation as a result of a specific creative process tempers creativity into a meaningless and hopelessly nebulous term. In a similar vein, the Spanish Inquisition emerges in Weiner’s account not as a religious war, but as a stifling of heretical creativity. Creative heretics? This confluence of disparate personal and social forces under the rubric of creativity undermines the initial promise of the investigation. Concluding with a paean to the blessings of creativity in everyday life, Weiner digresses into blathering suggestions about creative joys and other bloated selfhelp trivialities on his way to a disappointing finish.

A blurry book, desperately in need of sharper vision in order to succeed either as a history of creativity or as a guidebook for the lost.