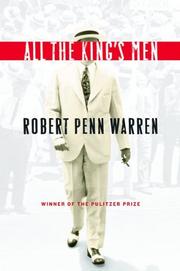 ALL THE KING'S MEN

Once again Huey Long has provided the prototype for a novel built around a tycoon in the making. Warren's character, Willie Stark, a young lawyer from back country in the Deep South, abuses the gift of power as did the central figure in A Lion Is In the Streets by Adria Langley and Number One by Doe Passos. This conception of Willie Stark comes much closer to the Dos Passos character — and the method used of having his publicity man tell the story bears close parallels. But All the King's Men, while enmeshed in political chicaneries, is a much more highly personalized story than Number One, and at the same time never an emotional or sentimental story (as many found the Langley book). Its weakness lies in its very dispassionate presentation — one feels neither dislike nor sympathy for Willie Stark. His relations with the wife he used and pushed aside, with the son he idolized and ruined have no atom of depth in humanity. Even his numerous affairs stir no emotion in the reader, either for Stark himself or the women he used. There's a certain sureness of technique — objectivity of approach that has its value. But as a novel it provides limited entertainment for largely a male market.