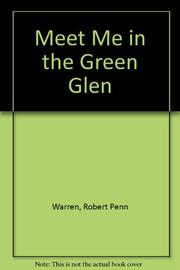 MEET ME IN THE GREEN GLEN

Life was the way things went away from you, and left you standing," indeed abandoned in the loneliness which shrouds this new novel. It is however a melodrama and perhaps even more so than any of the later works — Flood, The Cave, etc. Although the first half begins slowly, insistently set in another small Tennessee backwater where the living is not only Poor but slack and shapeless, it cumulates extravagantly and even the overuse of certain mystical words (such as white) cannot reclaim it. Down in Spottwood Valley Cassie lives alone in the ruined house with the ruined specter of the older man she had married, Sunderland; he has been motionless for twelve years following a stroke. Angelo, a Sicilian with a prison record, walks down the road in the rain and into her life. Before long he shares her bed, gets her out of her gray nightgowns and omnipresent sweaters into black lace panties, and makes a woman of her — in fact "made her feel beautiful." But then there's his assault of a black girl (Sunderland's by-product) and the killing — Sunderland is knifed in bed — and the trial which leads to Angelo's execution even though Cassie, now institutionalized, confesses. The tragedy and violence linger on and on to the final coda — a suicide. And in spite of the "luminous" (another favored word) overcast, the air is thick with loss, regret and failure.