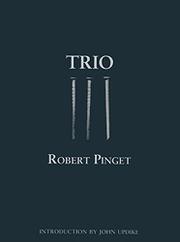 Swiss-born Pinget (1919–97) was one of the lesser-known practitioners of le nouveau roman. These three works, published in the U.S. between 1978 and 1982, are collected here for the first time.

In the introduction, John Updike modestly calls Pinget a writer he “scarcely understands,” before proceeding to a brilliant analysis of his material and methods. Between Fantoine and Agapa, the first work in this volume, is a collection of “disconnected pranks” that were written, Updike offers, “under the influence of the surrealists.” (That influence is in full bloom in “The Roadman,” in which a woman called Marie hangs her mother. Marie will not be prosecuted; as a redhead, she enjoys immunity.) The second piece, That Voice, is the longest. Expect to feel disoriented, for Pinget writes out of a deep-seated “confidence in the mechanism of the subconscious.” The subject matter concerns a murder in a cemetery in provincial France. As for who exactly was killed: “It was all as clear as mud.” We hear the voices of the villagers (“their gab-holes going hell for leather”) as they embellish or contradict each other’s accounts. The whole is a whispering gallery, an echo-chamber, demonstrating that there is no end to the propagation of rumors. In the final piece (Passacaglia), a corpse has been found on a dunghill in the countryside. Is it the body of the owner of the country house? Or the postman? Or is it just a scarecrow? Resist the impulse to search for the answer. The story is not meant to be puzzled out. Instead Pinget’s prose should be inhaled, like an aroma; the stellar translation helps.

Adventurous readers will find nourishment for their imaginations in these works; true fans can fulfill Pinget’s wish by reading them aloud.