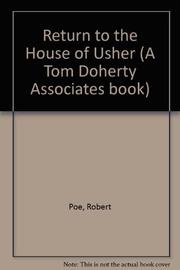 RETURN TO THE HOUSE OF USHER

Psychological thriller debut by a distant relative of Edgar Allan Poe's that, while it will not win an Edgar, holds up as a consistently interesting tale, though more in the line of a Wilkie Collins mystery/romance than a Poe grotesquerie. Crowley Creek, Virginia, some 60 miles from Roanoke, is the location of the rebuilt House of Usher, now a sanitarium run by Drs. Roderick and Madeleine Usher, twins and descendants of the notorious Ushers made famous by Poe. Rod's best friend is John Charles Poe, a relative of Poe's, an independently wealthy man with a degree in English literature who nonetheless works as the sole, trod-upon reporter for Fanny Boynton's Crowley Sentinel. John Charles has inherited Crowley House, as well as a casket of private papers written by Edgar Allan himself (at Sotheby's these would, of course, be worth zillions, but that's never mentioned). Roderick goes balmy when Madeleine (she's a shrink) dies. Not only he but other patients at the sanitarium have seen ``ghosts'' of dead patients wandering the halls, and now Rod and even John Charles see the late Madeleine waltzing about. Throughout the story the supernatural is hinted at—but are the ghosts only a ploy by unscrupulous New York hoods who want to open a casino on Rod's grounds and use it for money laundering? Are the hoods in league with certain locals such as Fanny Boynton, lawyer Prynne, and the mayor? Do real ghosts blunder about the maze of tunnels through and under the House of Usher? And what of the copper-lined room where the original Madeleine was laid out and later awoke from premature burial? Will the Poe papers in the casket reveal to John Charles the abominable secret of the Ushers? And will the approaching monster hurricane do more than knock a few boards loose from the House of Usher? Less supernatural than the elder Poe—but the hidden papers of great poets always cast a spell.