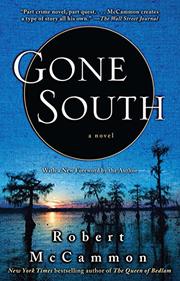 If, in Boy's Life (1991), McCammon took a giant step away from horror (Mine, 1990, etc.) and toward his own potent brand of southern gothic, here he takes a daring leap--with a captivating but calculatedly eccentric fable of an outlaw Vietnam vet who learns about the power of redemption. The vet is Dan Lambert, 41, a hard-luck Louisiana carpenter slowly dying from cancer (Agent Orange). Dan's story starts out in swift if familiar thriller-fashion as, through a series of tragic overreactions, he shoots dead the bank officer who's ordered his truck repossessed, and flees. In fact, this opening strongly echoes that of David Morrell's First Blood, which introduced fellow-vet Rambo--but where Rambo was chased by a stalwart sheriff, Dan is soon hounded by two markedly bizarre characters: Flint Murtaugh, a bounty hunter whose secret weapon is the Derringer held by his Siamese-twin brother, Clint, whose arm and head extend from Flint's torso; and Flint's new sidekick, Pelvis Eisley, a drop-dead Elvis (circa 1977) impersonator. And after he makes final contact with his estranged wife and son, Dan finds himself traveling with yet another misfit, Arden--whose beautiful face is marred by a hideous port-wine stain and who's searching for the ""Bright Girl,"" a legendary faith healer whose touch will erase her scar. Improbable events pile up as hunters and hunted race into the deep bayou, where Flint/Clint and Pelvis run afoul of drug dealers and where Dan, touched by his hunters' flawed humanity, joins forces with a Cajun swamp rat to fight to save their lives--and then accompanies Arden to her transfiguring meeting with Bright Girl. No subtlety but lots of surprises, not the least of which is McCammon's ability to humanize deeply even the most absurd of characters. With its careening plot, jackhammer suspense, and very Dean Koontz-like upbeat moral gloss, then--a real crowd-pleaser.