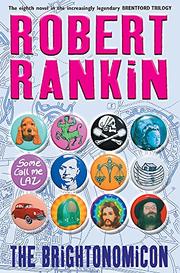 Rankin, a bestseller in England, returns to lunacy with the eighth in his ever-growing Brentford “trilogy.”

As usual, the plot is an ADD-afflicted pastiche of “Illuminati”-style conspiratorial maunderings, sub–Douglas Adams absurdities and self-conscious wisecracks. The narrator is a teenager who had taken a trip to Brighton “hoping for a weekend of sexual adventure in a town that is noted for that sort of thing” but ending up dead, only to come to in the company of one Hugo Rune, an ancient and baffling raconteur with a Sherlock Holmes fetish who’s looking for an acolyte to record his adventures. Rune explains that he has to solve 12 problems in the next year, one per month, and if he fails, doom will befall Mankind (Rankin wouldn’t have it any other way). It also turns out that the streets of Brighton hide 12 ancient constellations that figure into these tasks. Thus, many ancient conspiracies are unearthed, causing the protagonists to face (and even suffer) death on multiple occasions. Highlights in this installment include a bartender who will only speak in rhyme, crab-suited aliens and the return of the dread Mouselcomb Pirates, who haven’t had a good pillage since the early 1950s. The result is somewhat wearying over the long haul, but surprisingly funny through some stretches.

A decent introduction to an author who never saw a pun he didn’t like, and a definite improvement over The Witches of Chiswick (2004).