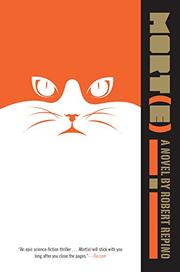 So, let’s imagine W. Bruce Cameron’s silly and maudlin A Dog’s Purpose recast as a violent and frightening post-apocalyptic global battle for the souls of Earth’s survivors, layered with a messiah prophecy that makes The Matrix look simplistic by comparison. If that’s a bit much, maybe just think Animal Farm re-imagined by Orson Scott Card. Either way, you end up with this devilishly entertaining debut about anthropomorphized animals caught in a conflict between an invading army of insects and the planet’s few remaining humans. The novel begins from the point of view of Sebastian, an aloof but observant house cat whose only true companion is a dog named Sheba. Through animal eyes, he describes Earth’s descent into chaos as giant ants—that’s Hymenoptera unus to you—break through the planet’s crust to wreak havoc on human civilization. At the heart of their plan is the decision to release a virus that gives all animals self-awareness, a bipedal structure and better-than-human intelligence. After the change, Sebastian recreates himself as the cat-warrior Mort(e), the hero of a breakaway army called The Red Sphinx. “Don’t you all know who this is?” says his superior to a new crop of recruits. “This is Mort(e). The hero of the Battle of the Alleghenies. The Mastermind of the Chesapeake Bridge Bombing. The crazy bastard who assassinated General Fitzpatrick in broad daylight. This choker was killing humans before some of you were born.” After a while the story gets kind of messy with a memetic virus called “EMSAH,” the aforementioned prophecy and the preordained battle to end all wars, but it’s still awfully good sci-fi that imagines a world where humans are no longer at the top of the food chain.

A wild riff on interspecies warfare sure to make pet owners think twice the next time their tabby cats dart by.