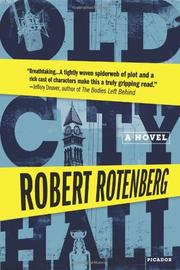 From criminal lawyer Rotenberg, a debut thriller in the vein of Scott Turow or John Grisham.

The novel begins with a corpse. Katherine Torn, a “raven-haired,” 40-something beauty and spouse of Canadian radio star Kevin Brace, lies in the bathtub of their Toronto high-rise, dead of a single stab wound. Brace whispers “I killed her” to the man who discovers the scene, then goes silent, refusing to communicate even with his lawyer by any means other than scribbled notes. Why does he seem so determined not to mount a defense? What to make of several details that don’t fit? The mystery’s unraveled by a revolving cast of narrators including the opposing lawyers, a police detective named Ari Greene and Daniel Kennicott, first cop on the scene, an ex-lawyer who switched professions after his brother’s unsolved murder, the lone blemish on Detective Greene’s record. The police work here is mostly the routine stuff of procedurals, but Rotenberg knows well and captures compellingly the rivalries, ambitions and chicanery of the courthouse. The strongest scenes have to do with the shifting strategies of the crown attorney, straight-arrow Albert Fernandez, and Brace’s chosen defender, Nancy Parish, and with their attempts to read the enigmatic accused and to mollify the judge, an imperious blowhard named Summers. The other star is the city itself; Rotenberg makes Toronto less a backdrop than a character in the drama.

Both plot and prose are ordinary, but the atmospherics, and especially Rotenberg’s affection for the city of Toronto and the involutions of the law, make this a fast-paced, appealing addition to the genre.